Tyranny and cruelty have spread across the galaxy, and only you can stop it!

Save the Universe is a sci-fi adventure roleplaying game in which the players create their own great galactic menace and then portray the brave heroes battling against it.

A relentless hunter, seeking revenge against the bloodthirsty admiral who bombed your home planet into oblivion?

A mysterious seer, searching for cosmic secrets, hoping to find a way to stop a plague of civilization-devouring alien insects?

By the time the pizza is gone, you’ll have an epic saga and a cast of characters. Then you can jump right into the action, with simple, story-focused rules that reduce prep time and reward players for pursuing their personal dramas.

Charge your blaster. Board your starship. Set your course.

The character sheets and saga sheet for this game are available as free downloads.

This game uses the SAVE System roleplaying rules.

In order to download this game you must purchase it at or above the minimum price of $7 USD. You will get access to the following files:

Hi, has the whole game been translated into French?

No, just the hero sheets, saga sheet, and ship sheet.

Hi I purchased this in the Racial Injustice Bundle earlier in the year, are there supposed to be Hero sheets available or is it just the one document to download?

The hero sheets should be available as free downloads under the "Download Demo" section of the game's store page (https://dbisdorf.itch.io/save-the-universe). If you don't see them there, let me know and I'll dig into it.

Save The Universe is a 90 page scifi or science-fantasy rpg in the style of Star Wars. It's very well-written and more about storytelling than beating the mechanics, but even more than either of those things it's about collaborating with the people at your table to create the setting as you play it.

It does, however, broadly expect you to have a cast of scrappy, complex heroes and a ship, and it expects you to work against a vast and entrenched Enemy. You could theoretically run it without either of those things, but there's less support for that.

Visuals-wise, Save The Universe doesn't have interior art, but its layout is extremely clear and easy to read, and the rules are clearly explained and super easy to follow.

Mechanically, Save The Universe feels a little similar to Blades In The Dark or Cthulhu Dark, but it's very distinctly its own thing. You roll a pair of d6s, and different numbers cause each die to succeed if certain conditions are met. These conditions might include being in good health, having specific character class features, having support, etc, and it's pretty common for a typical character on a typical roll to have a lot of these conditions met. Either way, if one die succeeds, that's a complicated success. If both do, it's a clean success. Complications and failures can revert progress clocks, cause damage, or introduce other dangers, as in Blades. Unlike Blades, PCs' health is easy to damage but recovers fully whenever you get a decent rest. Furthermore, damage never kills you. It just takes you out of action.

Character creation is fairly meaty, but a lot of it is determining your character's fluff and their place in the setting. This is all done deliberately, not through random rolls, and it feels like by the end of the creation process you have a solidly deep understanding of who you're playing.

Also, a lot of tools and prompts are provided to help you build and flesh out your own setting (if you want to use a custom setting,) and these make up a lot of the book's pagecount, so if reading 90 pages to use the system is a deal-breaker, you need to read way, way less than that if your game takes place in a pre-established universe. The world-building tools are also really solid, so if you and your group do enjoy collaborative world-creation, I would strongly advise checking them out.

GMs in particular will find a lot of support from this game, and I think I'd strongly recommend it to first-time GMs for its GM tools alone. There's advice for creating scenarios without vastly overspending effort. There's ways to calibrate the game to different lengths of play, including one-shots and sequential campaigns. In general, the advice assumes you don't have infinite time and energy, and that you're looking for options that split speed/ease/effectiveness pretty evenly.

It also does a really good job at predicting potential problems and snares, and teaching you how to avoid them before they can happen---and I'm giving this its own paragraph because I've never seen a game say "avoid making all complications problems for the current scene, you'll bog things down. Kick some complications down the road to be trouble later" before. And it's *really* essential advice in games that tends towards succeed-with-a-complication.

Past the GM section, there's sample scenarios and settings, all of which feel solidly fleshed and written, but at this point the tl;dr is: this is a very well-made game. Its first visual impression isn't grabbing, but everything beneath that is rock solid, and if you like Blades, Fate, PbtA, or have a scifi epic that you want to collaborate with your players on, I would strongly recommend buying a copy of this.

Thanks for the thorough review!

Hello, I translated the game sheets in french for my personal use. If you want to add them to your product pack, just let me know :)

That sounds great! Yes, I'd love to add them.

Hi there! I wrote a capsule review of Save the Universe and figured you'd like to know. It's not entirely positive; sorry about that. Guess it's true what they say, that focusing on the negatives is so much easier.

In other news, the game page would look better with a gentler contrast than white on black, and uploading PNGs of the hero+saga sheets as screenshots would help as well.

Thanks for writing this and making it free!

Thanks very much for the review! And those are good suggestions about the game page. I'll see what I can do as soon as I get a few free moments. 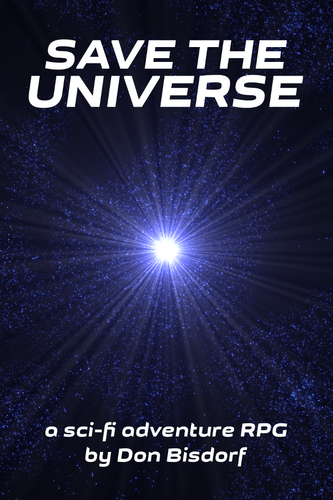 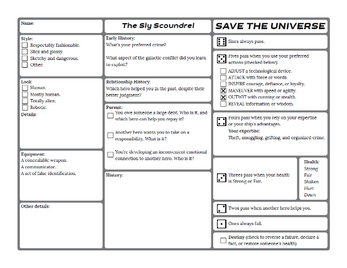 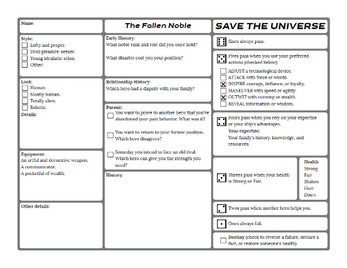 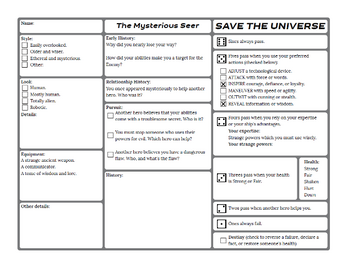